Our Customers Love Our Services 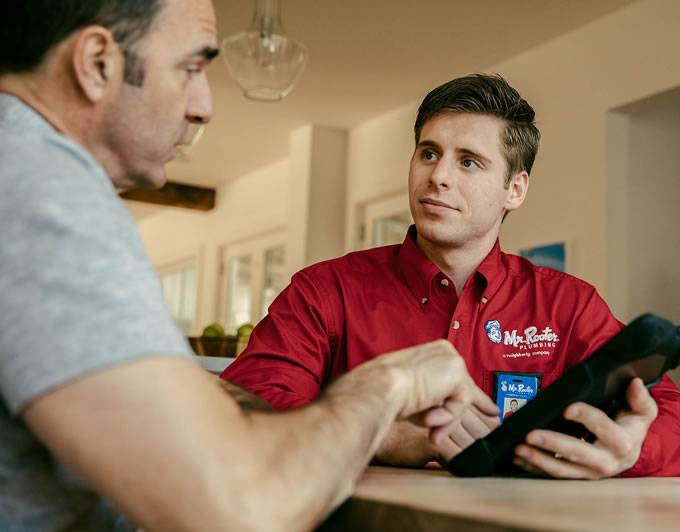 Dave was extremely knowledgeable and took the time out from his schedule to provide me with an understanding of the issues and my options for repair, and kept a friendly demeanor despite being one of the last appointments of a long day. Firmly secured me as a long term customer.

Dave came to inspect an issue that was going on with our plumbing. He was very patient and polite. He was able to confidently explain what the issue likely was and outlined pricing to someone who doesn't know squat about plumbing. Definitely recommend this company ????????

Mr. Rooter is quick to respond when called and their prices are very reasonable. Our technician, Dave, is so pleasant to work with and makes frustrating situations easier to handle! We’ve been calling Mr. Rooter for our plumbing needs for several years now and will absolutely continue using them in the future!

A HUGE thank you to John and the whole team at Mr.Rooter. Honestly would never use any other company. Very honest and helpful and have good prices. John is normally the one to come out, and never once have we had a bad experience with him or The team as a whole. Couldn’t be happier with our experiences with this company.

All I can say is a huge Thank You to Dave, Tim and Joe you guys we're the best.. Great quote from the start, on time, clean and professional.. The amount of work that your crew has done today was beyond expectations and by far absolutely the best. The repair worked as you said it would and looks absolutely amazing. Almost little to no modifications needed on my end and my kitchen is once again complete.. I honestly recommend Mr. Rooter Plumbing by all means to anyone in question of other quotes from other plumber.. Local company local crew what more do I need to say.. Again Thank You Mr. Rooter

Ryan and Sean were both extremely knowledgeable, friendly, and professional. Diagnosed and located the problem quickly, and promptly worked to eliminate the issue using the Hydro-Jet system. A somewhat expensive procedure but I will explain. I used this company over a year ago to unclog the same floor drain using the regular snake type machine. At that time it was explained to me that this drain pipe was extremely clogged with debris, and this method would only create a small opening through it and would eventually block up again. They suggested at that time to Hydro-Jet the line but I didn't have the extra money. Well, they were absolutely correct and the line began to slowly back up once again. I scheduled an appointment for the next day and the issue was resolved. Ryan explained that the kitchen line connected to this floor drain line and that after years and years of use, that was the culprit. The amount of debris that was unblocked using this system was incredible, (not to mention disgusting). Ryan and Sean were pros and had the job done in no time. This company was up front with me a year ago and absolutely correct in there assessment. At no time did I feel pressured into something I could not afford. Time will tell just how good the Hydro-Jet worked on cleaning th

We had a pretty bad partial blockage in the main pipe going out from the house to the street sewer. Ryan did a great job asking questions, assessing the situation, and fixing a the problem that included backed up sewage puddle in the crawlspace. Nice guy. Id recommend

Very happy with our service. Ryan was great and very knowledgeable. We expected it to be very expensive and it wasn`t and we were happy they were able to come out so quickly.

We had to replace our sewage drains under our basement floor and a good way out the house. Chris B. Was wonderful. He explained everything to us, showed us on camera and spent all the time we needed with questions and concerns. Treated us honestly and professionally. Josh, Chris, Jason, Dan and the rest of the crew were EXCELLENT. They were all very professional, great people. They also cleaned up EVERYTHING beautifully.

I called Mr. Rooter when our water main broke inside our home. I had them give me an estimate and then I read scathing reviews on this company. I was pleasantly surprised as the manager gave me his cell phone number if I had any issues at all. His guys did the job in one day. They were great & will return in the spring to fix our yard & replace our sidewalk!

John R. and the other guy helping did a great job! They were both very polite and professional. It helped take a little of the sting out of the EXTREMELY INFLATED price. I guess we paid for not only the exceptional service, but the name too. Thanks guys for a job well done!!

Ray was very professional in all aspects of his duties. He arrived promptly, within 10 minutes of my notification call from the main office. He was able to investigate the situation by crawling into a crawl space under the rental property and identify the leak. The leak was easily isolated and subsequently repaired by me (the property owner). Ray explained the Valued Customer Protection Plan to which I am now an enrolled member. Basically, Ray was just a downright nice guy. Thanks Ray.

I was most appreciative that my call for a leaking hot water tank was answered so quickly. The company sent me photos of the men to expect and the time they would arrive. My whole house water system is attached to the water tank, and it was a big job. The guys did a great job, checked to ensure all was working properly and left a clean workspace. They were courteous and professional. Thanks guys!

We had a nagging kitchen sink clog off and on. After many drano attempts we got sick of it. Tre was sent to us and he did an awesome job. Fixed our problem right away!

When I called, I was expecting a 3 to 6 hour wait . Boy was I surprised when they called and said he was on his way. John was very courteous, professional and knowledgeable. He explained everything to me, including different price options and costs. I am so happy with what he recommended. I would use their service again should the need arise. Thanks Mr. Rooter!!